It's OK To Go At Your Own Pace 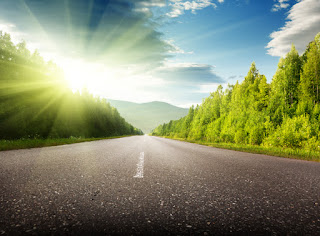 I was taking a spin class the other morning and peddling along, enjoying the feeling of my body in motion and listening happily to the music. As usual I was keeping up with the instructor and the rest of the class and as time wore on I started feeling a bit tired. Shortly thereafter the instructor called out the next move and then gave the modified version if someone wasn't feeling up to the initial movement she had demonstrated.  My very first thought was that I could actually use the modified version in that moment. My second thought was "I am certainly not going to be sitting down while the rest of the class was doing a standing move." So up I went.

And then I had to ask myself "who are you taking this class for?" And the answer we ME! And I sat down. I realized that it didn't really matter what the rest of the class was doing. That it was my ego pushing me to get up when I needed a minute of active recovery instead. Our egos are quite tricky that way. Pushing us to keep pace with what this one or that one is doing. Making sure we are right there at the front of the line, even if it's going against what's best for us in that present moment. Now I am not saying that there is anything wrong with being driven, but it's worth asking yourself where that drive is coming from. Is it originating from your ego or is it coming from your inner self? And which one truly has your best interest at heart?!

Notice above I used the term "active recovery." I did not stop spinning. I didn't say I am tired and get off the bike and leave the class. But I did what I needed to do for myself in that moment. And that active recovery actually allowed me to operate more consistently at the level that was best for me. I didn't burn myself out.
It didn't really matter what anyone else was doing on their bikes. Everyone else was living (or exercising really) their own reality and I was living mine.

That spin class was a nice metaphor for life in general. Think of how many times we've pushed too hard because our egos told us to. Because we were stuck in a place of competition and wanting to "be better" than others. Again I am not knocking drive or motivation because I think they are both necessary to get us to where we want to go. But it's the place or origin that is of worth taking notice of. I believe when they come from our true selves that magic happens! Because then it's not about trying to be better than someone else but to be our own best self.

Where does your drive come from? Is it ego driven or is it born of your inner-authentic being?
Have a beautiful day!


For a complimentary half hour coaching session I can be contacted at info@heatheroneillcoaching.com.
Posted by Heather at 2/01/2013

Heather
I am a life coach who was led into this profession by my own life changing experiences that brought me back to a path of personal growth. It is my intention to share my thoughts, experiences and a-ha's in order that they may touch you in some way or help lead you to your own personal expansion. Written with love. For a more in depth look at what I do please visit heatheroneillcoaching.com